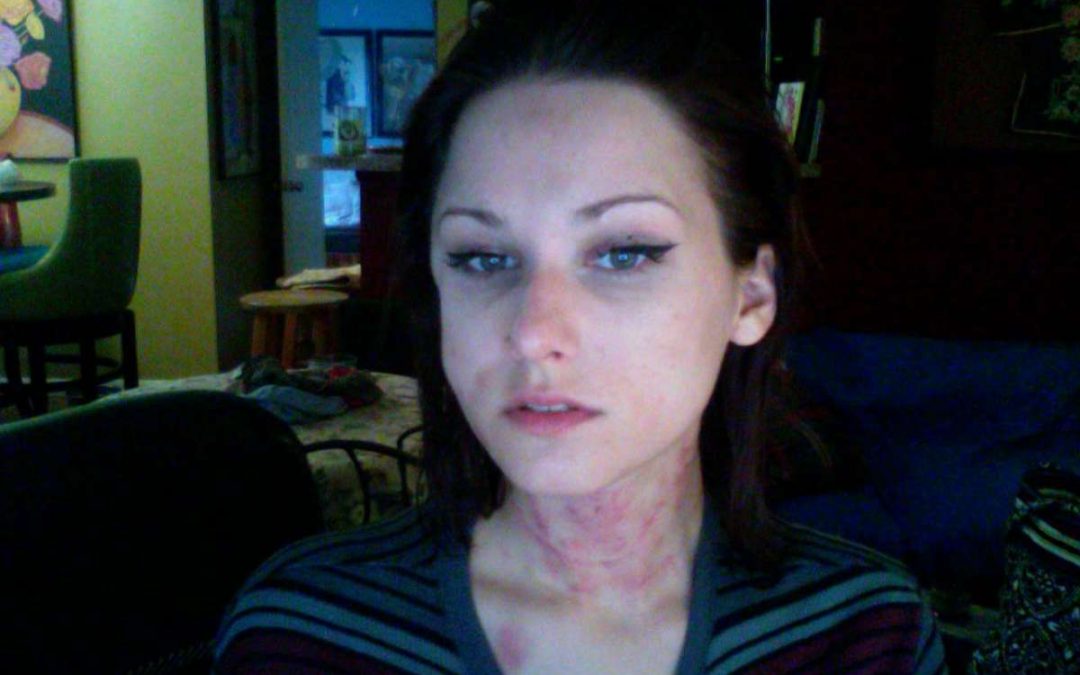 Anne-Christine Johnson took these selfies after an attack by her former husband who pleaded guilty to her murder.
by Nick Powell, the Houston Chronicle

GALVESTON — It was a day Stephanie Johnson had long anticipated: The opportunity to look Shaun Hardy in the face from across a courtroom and list all the ways he ruined her life on that fateful day in December of 2016 when her daughter, Anne-Christine, was found wrapped in dark plastic and duct tape in his garage.

Wearing a floral dress and turban covering her head, bald from chemotherapy treatment for cancer, Johnson glared at Hardy as she approached the witness stand. She read from a written victim’s impact statement, recounting how her daughter could not escape Hardy’s “insane wrath.”

“You’re a fabulist,” Johnson said to Hardy, as he looked on stone-faced, his hands shackled, wearing a green Galveston County Jail jumpsuit. “We will never know the truth of how, or why, or even when you finally decided to take my precious Anne-Christine’s beautiful life.”

Moments earlier, Hardy, 35, officially pleaded guilty to murdering Anne-Christine Johnson and tampering with her corpse, as part of a plea bargain deal his attorneys struck late last week with Galveston County prosecutors. Judge Patricia Grady signed off on Hardy’s 30-year sentence Monday, which includes 20 years for the tampering charge. He will serve both sentences concurrently and be eligible for parole after 15 years.

Hardy was arrested on Dec. 30, 2016, after League City police found the body of Anne-Christine, his ex-wife, wrapped in plastic in his garage, with scented candles arranged around her corpse. Anne-Christine’s father reported her missing on Dec. 12 and police had spent several weeks combing wooded areas near the home on Chesterfield Lane.

Then in early January, police showed up at Hardy’s Chesterfield Lane home with a search warrant for cell phones possibly linked to the case. When a detective neared the garage, he noticed a “strong odor of decaying flesh,” according to a probable cause affidavit.

Once inside the garage, the detective spotted an object the size of a human body, covered in dark plastic and duct tape, with scented candles arranged around it.

Despite initially telling investigators that Anne-Christine had been picked up from his house by someone driving a white sedan, Hardy would later confess to the brutal murder, telling police he stabbed then tried to suffocate Johnson because he “wanted to see” her die, according to court documents.

Hardy’s attorneys, however, convinced a judge to disallow jurors from hearing one of two recorded statements he gave after his arrest, invalidating his confession.

Kacey Launius, one of the prosecutors on Hardy’s case, said his attorneys had originally offered for Hardy to plead to a lesser charge of manslaughter and a reduced prison sentence, which prosecutors declined. Launius said they were preparing to begin a jury trial in December when his attorneys came back to them with an agreement to plead guilty to the murder charge.

“The most important thing that happened here is that the (Johnson) family got to see him stand up and take responsibility for what he did to Anne-Christine,” Launius said. “I think 30 years is a good result so that the family can start to heal.”

Stephanie Johnson said she was willing to take her chances with a jury trial but was pleased nonetheless at Hardy’s sentence.

Anne-Christine’s family packed the courtroom for Monday’s hearing. They were silent as Hardy entered handcuffed and sat with his attorneys. Grady read Hardy the terms of his plea agreement, and Hardy officially entered his guilty plea to the two charges.

Lee Johnson said he would attend “any and all future parole hearings” to ensure that Hardy served the entirety of his 30-year sentence.

Stephanie Johnson detailed “all the ways (Hardy’s) actions had destroyed my life,” from almost losing her business and house, ignoring warning signs of cancer, and even avoiding kitchen knives, the weapon Hardy used to kill her daughter.

“By law, you must spend at least 15 years of your 30-year sentence behind bars, but I am a lifer sentenced to the cruel and unusual punishment of trying to forget the grisly details you voluntarily provided of my daughter’s slaughter at your hands,” Johnson said.

At the conclusion of the hearing, Hardy was escorted out of the courtroom by his attorneys, who did not respond to a request for comment. Stephanie Johnson said that a family member could see tears in Hardy’s eyes as he walked out.

Hardy and Anne-Christine Johnson were married in 2013 and divorced two years later. They had one child together, and Johnson had another son from a previous marriage.

But long before the shocking murder charge, court documents show that the two had a fraught relationship.

In 2014, Hardy filed for divorce and was awarded primary custody of their son. The following year, Johnson alleged that Hardy choked her, pistol-whipped her and tried to drug her during a June 2015 fight, according to court documents.

“I am afraid that without this protective order, Shaun Philip Hardy will continue to hurt me or even kill me in the future,” Johnson wrote when filing for a protective order after the blow-up.

Johnson’s court filings came on the heels of a similar set of paperwork from Hardy. A judge granted both protective orders but canceled them before the end of the next month.

The conclusion of Hardy’s case brings some much-needed closure for Stephanie Johnson. After the hearing, she planned to pick up Anne-Christine’s older son to visit her gravesite and explain to him what happened to Hardy.

“I wouldn’t say I’m happy but I don’t know what I’m going to do when I wake up tomorrow and don’t have to check the daily docket to see what the latest nonsense is regarding Shaun,” Johnson said.

Nick Powell covers Galveston and the Bay Area for the Houston Chronicle.

Article courtesy of The Houston Chronical