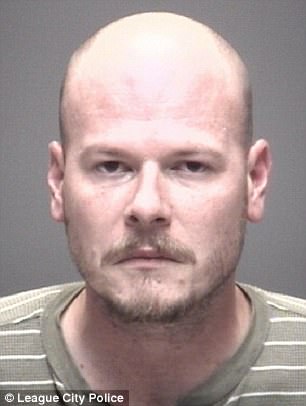 Shaun Hardy was arrested after remains were found in his home.

The case against a League City man accused of killing his former wife is headed to an appeals court after a district judge ruled a recorded statement the accused gave police was inadmissible at trial.

The trial of Shaun Philip Hardy, 34, on one count of murder and another of tampering with his ex-wife’s body was set to begin Oct. 15 but now could be delayed for as long as a year.

Hardy is charged with murder in the death of Anne-Christine Johnson. League City police arrested Hardy on Dec. 30, 2016, after finding Johnson’s body wrapped in plastic sheets in his garage.

The trial went into limbo when Judge Patricia Grady ruled jurors could not hear one of two statements Hardy made to investigators and prosecutors appealed.

The case could take between six months and a year to wind its way through the 14th Court of Appeals in Houston before it returns to Galveston County, Chief Assistant District Attorney Gina Gilmore said.

Prosecutors wouldn’t comment about how important the statement was to their case against Hardy, but his defense attorney said it was essential.

DeGuerin and Ward have since withdrawn as Hardy’s attorneys and Krieger has taken over the defense, court records show.

Grady on Oct. 5 denied a motion to suppress the first statement, which investigators took in the backyard of Hardy’s house at 617 Chesterfield Lane in League City. The judge ruled a second statement taken at League City Police headquarters was inadmissible, however, according to court records.

Hardy during that second interview asked several times whether he could call his lawyer, but police didn’t allow him to use his cellphone, which investigators had seized, according to the motion to suppress.

Gilmore declined to comment about why the district attorney’s office decided to appeal the judge’s decision. But Krieger said the statement was crucial to the prosecution’s case and that many parts of the statement had been included in probable cause affidavits used during the investigation.

An arrest affidavit from Dec. 31, 2016, stated that Hardy had admitted killing Johnson and gave some details to police about how it happened.

The motion to suppress, which was filed Oct. 23, includes some excerpted comments Hardy made to police asking to have his lawyer present and responses from police.

The excerpted police comments acknowledged Hardy had a right to have his attorney present during the questioning, according to the motion.

The motion does not include the full transcription of either interrogation, but it does describe the first interrogation as lasting 41 minutes.

“I hope very much that the second confession is re-admissible to the court,” she said.

More than half of mass shootings in the U.S. involve a perpetrator who killed an intimate partner or family member. ... See MoreSee Less

More than half of mass shootings in recent years involve a perpetrator who killed an intimate partner or family member, including the gunman who killed six people in Colorado Springs.
View on Facebook
·Share

HPD: Boyfriend killed in crash after he hit girlfriend's car to try to stop her from leaving

A deadly crash that shut down roads near Bush Intercontinental Airport early Friday was the result of a domestic dispute, Houston police say.
View on Facebook
·Share

Ji and Elledge were married in September 2017. Details of the strained relationship between the two emerged during a November 2019 bond-reduction hearing when Boone County Prosecutor Dan Knight played recorded audio conversations in which Elledge said he wanted to end their relationship as quickly as possible. “I will bury the earth under you,” he is heard saying. ... See MoreSee Less

Columbia police have scheduled a news conference about the discovery of Mengqi Ji's remains for Thursday night.
View on Facebook
·Share